Beyond the picket fence

not quite as it seems…

Attached to the cosmetic drip

‘Lipstick is really magical. It holds more than a waxy bit of colour – it holds the promise of a brilliant smile, a brilliant day, both literally and figuratively.’

As the presenter called my name, I inhaled a long, deep breath, attempting to exhale the taunts that I could now expect from my siblings. Unbeknownst to my family and with the urging of peers, I had entered the Bayside Beauty Pageant. I sauntered across the stage, a barely thirteen-year-old endeavoring to hide her terror by emulating the poise of a princess: Diana to be exact. Wearing a shiny fuchsia grin plastered from ear-to-ear and a smudge of coral shimmer on my cheeks, I twirled before I joined the other contestants to wait for the winner’s presentation.

When my name was announced in the final three, it seemed that my participation in the pageant would no longer remain a secret. With that sash and tiara, I had just learned of the social advantage that beauty could offer, and how makeup could only increase my position. 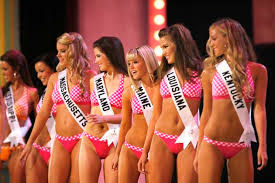 Last week at gym, I confided in a friend with whom I shared a collective passion for makeup and Boy George as teenagers in the Eighties.

‘I think I’m addicted to make-up, I mean I even have it on now… well at least I did, until I just sweated it all off,’ I said, attempting to squat in time to the techno music accompanying our pump class.

‘We are all addicts, I don’t think my husband even knows what I really look like,’ she said, wiping a bead of sweat from her brow, ‘or how much work it takes to look like this.’

‘Well, I’m going to lay down a challenge. I’m going to go a week without makeup,’ I said. These were fighting words; clearly my endorphins were beginning to kick in.

‘No way! You’re on your own… I can’t live without my makeup bag, I’d rather give up my first-born,’ she said.

In an attempt to embrace my earthen self and discover how entangled I was in the idea of always presenting my made-up image in public, I would embark upon the challenge to live without cosmetics for seven days. This wasn’t just a simple case of zipping up my makeup bag; there would be a rigorous plan to implement. I would begin the next day.

A trip to the pharmacy followed, where I realised that besides my pride, there was another price to pay: $79 to be precise. A post-pubescent pharmacy assistant advised me on a myriad of potions and lotions that would ensure I appeared at least ten-years younger. I must add, that I am a forty-five year old woman still struggling with undignified hormonal breakouts; my face was like Gaza, where pimples and age spots battle for territory.

‘My mother says that pimples come from angry thoughts,’ offered the girl, when asked which products I should use.

‘Really… well I’ve never heard of that before,’ I said, imagining that if her mother’s prophecy was actually true, a smattering of dots would soon be littering my landscape. I gathered up the eyelash curler, tweezers, moisturizer, scrub, lip balm and Clearasil and promptly made for the exit.

Beauty is big business; Australian’s spend $10.5 billion per year on personal care. The ‘Leading Lipstick Indicator’ is a well-known economic term coined by Leonard Lauder (chairman of Estee Lauder) who found that his lipstick sales increased during tough economic times.

During my own troublesome times, I too turn to make-up; a visit to a department store’s abundant cosmetic counter is my perfect antidote. It is in my genetic code and I had learnt from the master, ‘You can go without for one day, but go a second and people will think you have let yourself go,’ my mother warned.

As a young woman my mother’s bewitching beauty was the talk of her small English village. The town-folk even speculated that there must be ‘Gypsy blood’ in her lineage, as her olive skin and caramel eyes were uncommon amongst the blue-eyed, pale-skinned descendants of the Yorkshire moors. Such shallow sentiments were against the wishes of her parents, who prized academic appeal above aesthetic allure. At full-bloom her Adonis came to beckon, and the attractive gene would be secured for the next generation. Of course, in time beauty fades, and my mother learned that cosmetics could only provide a Band-Aid for her decline into the invisibility of middle age. During my childhood, I recall her dashing to her bathroom whenever the doorbell rang and emerging moments later with flushed, magenta cheeks and turquoise lids fanned by her luscious inky lashes.

As the theorem of modeling behavior would suggest: In adulthood, I too would use cosmetics as a crutch. My announcement to spend the week make-up free was so rash and bold that I realised that I hadn’t allowed myself any time to wean myself off my poison. I was about to go cold turkey.

What have I got myself into? A quick look at my diary of my commitments for the week ahead was confronting, there were going to be challenges. As a mature-age student at university, campus life without my mask would be a breeze, even with make-up, it is easy to feel anonymous among the throng of teens and twenty-somethings. My real concern lay in the numerous celebrations and obligations that loomed. On this particular week, I was going to see practically everyone in my social circle and beyond.

I was excited, but also a little apprehensive as the first day of my challenge arrived. I donned my exercise garb, slicked my hair back and caught my reflection. I was vulnerable, but I had to forge ahead unadorned as I would see my friend, to whom I had professed my ‘no makeup’ decree. At that moment I realised that I even wear makeup when I workout. A slick of gloss here, a smudge of mascara there, and a dab of concealer everywhere, I almost never reveal my naked face in public. It actually takes makeup to achieve my ‘natural’ facade.

Later that day I was overcome with horror when I remembered that I had parent-teacher meetings at my son’s school. I approached the hall trying to navigate my way to the teachers’ desks while somehow remaining on the periphery. This was the most awkward of debuts and there was nothing more intimidating than a group of private-school mothers, many of whom are bleached, bronzed and beautiful with help from the cosmetic industry.

My attempt to camouflage myself behind a floral arrangement was implausible as Sonia, a fellow mother, rushed over to great me. ‘Hello daaaarling, I haven’t seen you in ages. Are you okay? You do look a little tired,’ she said.

‘What was that darl?’ she said, planting a kiss on each cheek, leaving her stamp of Chanel red, ‘sorry, I’ve just seen Margi and I really need to speak with her, we must catch up soon,’ and she scuttled away. Thankfully she had kissed me on both sides and as I blended the lipstick I imaged it was blusher. While many of the women did not even notice my scant appearance, it was now clear to me that I had been dressing for them.

As I engaged with the tutors, I wondered why I felt that I needed a varnished veneer to talk about my son’s academic success. It is an all-male school, and many of the teaching cohort are still remnants from a time where women were expected to ‘put on their face’ at all times in public. I left pondering the question: To truly achieve gender equality should a woman cease to wear makeup?

I was a few days into the challenge and I was on a roll. Getting ready in the morning was a time saving experience without the worry of makeup application and matching my lip colour to my outfit. I tended towards tried and trusted tricks like pinching my cheeks as my mother had when I was a child, in the hope of accomplishing my blusher’s rosy hue. I recognised that a good hairstyle can disguise a sallow complexion, and one evening I even resorted to cutting a fringe with my nail scissors. I felt liberated; I would conquer this and free myself from the beauty ideal bestowed upon women by society.

Then disaster unfolded, just as the end of the challenge was approaching, I suffered from a breakout, smack-bang in the middle of my cheek. As the spot grew larger, my bravado waned. I would usually go into battle with concealer and powder, but armed only with Clearasil my defense was exhausted.

This is a terrible mistake I thought as I looked at my diary. It was the final day of my challenge, and it was my girlfriend’s birthday party. I tonged my hair and chose a favourite dress, but as I looked in the mirror I struggled to recognise the woman staring back. All I could see was a red spot shining like a baboon’s behind. Like a masterpiece awaiting its final touch, I was not finished, there was something missing. Overwhelmed with panic, and like a junkie in search of a fix, I circled my make-up bag, vowing not to delve into its dangerous depths. My resolve was weak, just a little concealer, and moments later my lips were glossy, cheeks pink and the blemish was disguised. The musky smell of the lipstick and the satin feel of the foundation on my skin were familiar and comforting, but after many days without, it also felt sticky and there was an acrid undertone behind the musk. It was a shock to see the transformation and I felt euphoric as I glimpsed my reflection. After six days without makeup, it felt akin to Bruce Jenner’s metamorphosis into Caitlyn. As with any high, I slid back down the slippery snake and remorse cast it dark shadow. Is this how an alcoholic feels when they pour just one little drink? It dawned on me: I am addicted to make-up.

I arrived at the party to find perfectly primed women adorned with pigment and shimmer, sipping on French champagne from between their cerise stained lips.

‘You look gorgeous, I lurvvve that lippy,’ said the host, who was celebrating her fiftieth birthday, though with a little magic from a makeup artist she looked more like thirty. We air-kissed, only just brushing cheeks attempting to keep our maquillage intact. ‘Come in close now, let’s get a selfie.’ Click. Her camera captured the evidence of my failure as she uploaded the photograph to Instagram. I was elated that a reasonable image with a clear complexion would appear, yet deflated that I had failed.

I returned home to reflect upon my (almost) week without makeup. There were moments of merriment, misery and a lot of in-between. I desperately wanted to abandon my pursuit of beauty, but ultimately I remain unchanged and still attached to my cosmetic drip.

‘You’ve won second prize in a beauty competition, collect ten pounds,’ my brother teased days after the pageant. We were playing Monopoly, and it seemed inevitable that I would draw that card.

‘Actually,’ I giggled and swept a hand in front of my Yardley Pink Lustre grin attempting to disguise my embarrassment, ‘I won first prize.’

Beyond the picket fence

10 thoughts on “Attached to the cosmetic drip”